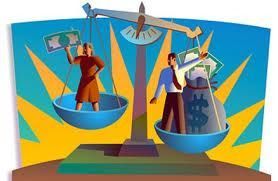 Is society responsible for ensuring that there is justice and equality in terms of how goods and resources are distributed? Do goods and services have to be distributed by a central authority that must dictate how much of a certain good or resource a person is allowed to have?

Is there a way to develop a kind of distributive justice that both ensures everyone has access to what they need and do not need to compete unfairly against others who have an unfair advantage, while at the same time not "punishing" those who have more?

In the previous blog we mentioned Alexis de Tocqueville who shared his view that the correct role of government should not meddle with the distribution of goods, and in fact should protect the accumulation of wealth because such wealth is able to be used to develop intellectuals and persons of elite training and culture that can benefit all of society, and the inequality that is produced by the non-sharing of wealth is justified because inequality becomes an incentive that the poor respond to, and will want to work hard and accumulate wealth so that they too can become intellectuals and wealthy.

But what was not taken into consideration was that those who were not already wealthy would have very little opportunity to move up - since wealth was not keen to be distributed outside of family or close business relations in Tocqueville's world - and this means that people would have to spend the money they did earn on survival - and continuing to work - in the hopes of being able to gain success yet never having the ability to raise capital or save up money to use as leverage to acquire a business or expand an operation or invest in new development - so while Tocqueville was correct when he said spreading money and wealth too evenly would reduce the chances of that wealth making an impact - it was also true that the concentration of that same wealth produced the very poverty and lack of mobility that made "wealth" possible.

We see that "justice" must in some way or another deal with the subject of distribution of goods and resources to ensure that there is a way to organize society so that artificial scarcity and preventable forms of poverty are not allowed, and ensuring that inequality does not enslave the population - but here there are many who disagree and see this as suppressing individual rights.

One of the most influential and popular arguments against setting up social regulations in regards to how goods and resources are distributed on the basis of protecting individual rights and individual wealth from state interference is seen in the arguments presented by philosopher and economist Friedrich A. von Hayek. 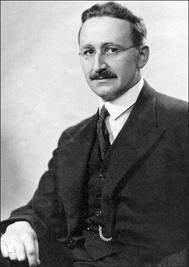 "A claim for equality of material position can be met only by a government with totalitarian powers."
-Friedrich August von Hayek


Hayek and the Question of Distribution

Hayek explains that human beings participating in a market and using their transactions to go about their daily lives gives us a very complex system that cannot and should not be regulated by any kind of central authority that tries to impose itself onto a "spontaneous order" that happens when people are able to freely participate WITHOUT interference.

Parents for example do not need to tell children how to play and what to play - children behave in a kind of spontaneous order that develops through complex systems of communication and will 'naturally' find ways to play and express themselves. The role of the parent is to ensure the basic safety and needs of the children are taken care of - beyond that the children should be given the space and encouragement to play without interference or smothering by the parent.

Hayek explains that socialistic planned economies that attempt to control the distribution of goods and resources in the name of "justice" and "equality" are invasive and disruptive to personal freedom, and endangers the "natural" organization of the "free market" which is seen as "knowing better" what is best for society.

This is one of the main points of Hayek's philosophy that explains why government and social systems should not have any say in the distribution of goods and resources - because once the state becomes involved in setting what society should see as "just" distribution, anything that does not "fit" into this prescription would become vulnerable to force by the government, and the result would be a society that is no longer free or able to express itself.

The central theme of Hayek's position on social justice is that individuals should not try to decide what is best for a society, because a society is not an organic being in and of itself, but is a product of all of the actions and decisions of individuals, that when counted together, create the concept of "society", and "society" cannot be blamed or held responsible for the actions of individuals any more than individuals can be blamed for the outcome of society.

Hayek and the Individual vs Society

In Hayek's view, an individual is not responsible for any unintended harm or consequence - even if it was pure ignorance on the part of the individual. And here, society itself should not be punished or made to obey rules that seek to punish the actions of an individual.

So when it comes to how goods and resources are to be distributed within a society, Hayek would say  that nobody can actually be held responsible because this would require that all individuals be forced to abide by rules that remove personal freedom and spontaneous organization, since society is simply the result of all individual actions together and no individual is aware of how their own actions will in the end affect the whole of society - which is something only the "free market" or "spontaneous organization" can sort out.

The major issue that needs to be seen with Hayek's position here is that even though an individual or a group of individuals may not be aware of the consequences of a particular action or decision, it does not mean that NOBODY is responsible.

Whether or not damage or harm or negative consequences were intended by an individual should NOT factor into whether or not those with the ability to respond, and thus have the responsability, will step in and address the issue to ensure that the causes for this disharmony are understood and that measures are put into place to prevent it's recurrence.

Individuals cannot claim that they are not responsible for society just because they are an individual. And society cannot claim that it is not responsible for the behavior of individuals just because it is a society. This is because we are all quite aware that nothing can happen without the approval of the majority, and when a majority does not work together in applying their political responsibilities, it does not then mean that they were never responsible. Rather, it means they have politically allowed the problems to continue without a resolution.

Societies in general have agreed that murder is not acceptable and that those who commit murder and intentional harm that cannot reasonably be justified in cases of severe emergency or self defense, are to be dealt with and not tolerated within the society. It is not enough that individuals detest murder and think it is a bad thing - they must act together and create the political will and demand and provide the support so that murder can be properly addressed and prevention/correction steps are enforced.

When it comes to poverty, exploitation, the lack of health and education for a growing number of citizens across the globe which in its own way is a form of slow and torturous murder, we run into the problem of "individual rights" and the idea that it is not the place for society to dictate how resources are distributed. Why the disconnect?

The Responsibility of the Public

When there are policies and economic systems in effect that produce the visible and measurable amount of growing debt, economic instability, poverty, and suffering that can otherwise be prevented with a change in monetary policy and social organization - individuals are no less responsible for such issues. Again - it is NOT ENOUGH that individuals decide that poverty and starvation and rampant debt for the majority of people that destroys billions of potential lives is something "bad" and "terrible" and that somebody, somewhere, should maybe possibly do something about it.

Yes, as individuals acting alone without cooperation and agreement and having no concept of how our actions influence society, Hayek is correct in that we cannot enforce policies upon society based only on our own values.

However, when we act together and utilize the rightful political might of the majority - the actions of many individuals in agreement not only gives us the greatest political influence, but also unites us in that responsibility. Thus any excuse that would justify suffering or poverty or economically inflicted slavery MUST be questioned in the same regard and attention that we give to instances of murder where the defendant attempts to justify the crime.

Poverty and the countless dimensions of suffering brought on by rampant inequality and the dishonor of human life have everything to do with the manner in which goods and resources are allowed to be distributed or concentrated in ways that do not provide equal benefit, and in fact lead to majority harm and enslavement.

If we are serious in our realization that we are the rightful Political agents of the world and that we bear the full responsibility of what our world and our societies are producing - then it should be clear that the distribution of goods and resources IS a matter of social justice - and here "Justice" implies enforcement and correction of wrongs.

Are we ready to accept what it means to actually make a stand against poverty and massive suffering resulting from inequality? Do we understand what this will entail and do we have the right to use authority and enforce our political agreement that poverty and suffering will no longer be acceptable? How can we use the state in such a way that enforces our decision and agreement but is not tyrannical or authoritarian?

In the blogs to follow we will have a look at what makes certain things enforceable by the state with public approval and what things are considered dictatorial and authoritarian, and how we can establish a governmental and political system that does what is necessary no matter what to establish the best quality of life for all, without becoming a tyrant in the process that smothers the very life it seeks to restore - and within this how the Equal Life Foundation and the project for a new global system differs from previous attempts in history to rectify the social problems of our world.
Posted by Unknown at 2:25 AM