Day 18 - The Politics of Failure: What's the Point? 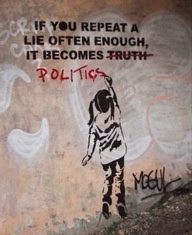 Tonight's blog is a continuation of a series -

Day 15 - Giving Politics a Bad Name
Day 16 - Restoring the Name of Politics
Day 17 - The Politics of Failure: We can't change the system... can we?

Day 18 - The Politics of Failure: What's the Point?

The current disposition of many in the world can be summed up in the statement "What's the point?"

This very statement has very unique and powerful effects that most people have not seen or considered.

This statement, if repeated enough times in a certain way, communicated to enough people, and accepted as a reasonable answer - will allow for the most horrible atrocities in the world to not only exist, but to flourish. It is therefore one of the most powerful propaganda devices ever put into use and it is commonly distributed and has worldwide effectiveness.

How is this possible and what is the REAL Politician (AKA You) to do about it?

"What's the Point" is the statement that justifies the unjustifiable in this world. It is the statement of seeing and realizing that there is something obviously wrong with the way in which our world is functioning, and seeing that it is NOT acceptable for it to continue this way - and yet one will convince themselves that they have no power, and have no ability, and have no way of changing things at all - and so "what's the point" of even trying if one person cannot make a difference?

Those who are able to make the claim "what's the point" obviously have no real consideration for what the actual point is - because in order for a person to see and realize that the world is destructively malfunctioning and billions of lives are at stake of permanent poverty and starvation while a handful of populations exist in luxury with an unending appetite for profit at any cost - and yet still say "what's the point" - indicates that there is a severe problem in the individual's ability to see and consider reality, and that the individual's value system has been completely corrupted to value money instead of life.

There is an assumed idea that most people have that the system is too big to take on and that the elites would never 'allow' for any real change to happen - So what is the point? Might as well live your own life the best you can because 'chances are' nobody else is going to care enough to really stand up and be willing to challenge the status quo - and even if they did, "chances are" they'll just be laughed at or totally cut off from the system. And because you're clever enough to see this, it just makes sense to not get involved with that mess. Right?

When self survival and self-interest overrides the decision to do what is best for all, this becomes a very destructive and CONTAGIOUS disease that affects the entire world system. And as much as we want to convince ourselves that one person does not make a difference this is simply not true and I will demonstrate how -

In accepting the idea of "What's the point" we must also look at what is included in this acceptance. By deciding that it is impossible to make any relevant change on our own and that it would not be worth the risk to put ourselves out there, it seems the "logical" choice would be to instead focus on self-preservation and survival.

So what next? we make "peace" with the system. We continue to work because we need money to survive and keep things stable in our world. We continue to work and labor in places that do not care about us and only desire us for our ability to generate profit and be part of a money making organization that must compete with other money making organizations.

We spend a large portion of our time producing or selling things that are not actually supportive or useful and are primarily made and sold for no reason other than profit. We spend an equal if not greater amount of time consuming things that are produced that we don't actually need, but are trained to want and desire.

We eat food that is malnutritious. We go to schools that miseducate us. We watch media that dumb us down. We buy products that we don't need. We pollute our bodies and the earth with the chemical waste of our products. We destroy habitats and supportive ecosystems and displace or force to extinction dozens of species each day.

In order to keep this all going - more and more debt has to be created in order for more profit to be enjoyed by the elite. More resources are exploited to keep the money system going - to keep products on the production line - to keep advertising agencies in the business of convincing us all to consume our way to oblivion.

It does not occur to us that it costs us multiple times more effort, more energy, more money, more waste, more exploitation of resources, more imposed suffering and austerity, more anxiety and stress and tension and health problems - just to keep things going the way they are - just because we accept the thought of "what's the point?"

And what happens when an individual accepts this and speaks this statement to another? ALL of the injustice, all of the suffering, all of the corruption is suddenly "acceptable", and this message spreads and becomes the social norm - to simply look at the state of the world and know that there must be change - but when it comes to the very moment of making that decision, the "virus" activates and the potential Real Politician instead will say the statement "what's the point?" because he or she once heard it from ANOTHER potential Real Politician who did not take a moment to investigate the statement and the consequences of "What's the Point?"

THE POINT IS - if we are concerned with not wasting time and resource over something that cannot be done, and not wanting to bother with something that isn't going to work out - WHY DO WE CONTINUE LIVING THIS WAY? The actual question should be "what's the point of NOT changing?"

What is the point of continuing to watch the very world diminish before our eyes just because we fear we might not make a difference?

What is the point of having a world system that cheapens everything that has actual value and replaces it with a totally made up and fictional monetary amount that in no way reflects the value of life?

What is the point of giving up our lives, our very living essence - to exist and survive in a system where we have to compete and take from each other by force what we could instead provide and produce together in agreement?

What is the point of being HERE, alive, with the once in an existence opportunity to in fact learn how our system works and for the first time in our human history begin to shape a world system that in fact can support all life equally without conflict, and to be able to restore to BILLIONS of fellow human beings their rightful dignity in this world, and yet still be hung up about our personal fears and anxieties that are humorously miniscule in comparison?

What is the point REALLY?

Again - we see the power of a single statement - and all we had to do was change the starting point.
In the blogs to follow we will have a deeper look at the point of why focusing on self-interest and self-survival actually makes it more difficult to survive in general and how this solution can be changed and solved politically by REAL Politicians who know the real way to use the statement "what's the point"
Posted by Unknown at 9:47 PM