Day 20 - The Politics of a Burning Building: The Door to "Survival" 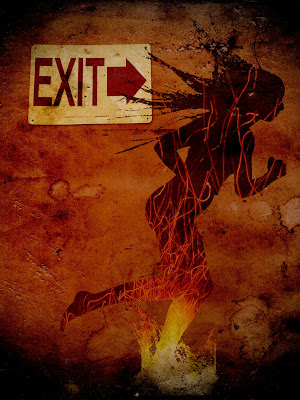 Day 20  - The Politics of a Burning Building: The Door to "Survival"

Tonight we will have a look at The People Seeking Survival. Here is a recap:

"The People Seeking Survival - This is the dimension of the average person who is now aware of the present danger and must make decisions as to how they will ensure that they can get to "Survival". This is the common majority who now face a crisis that is getting worse by the moment, yet the path to "Survival" is not clear." - Day 19 - The Politics of a Burning Building: Introduction


When people have a common goal - the best and most effective method to attain that goal is through mutual support and cooperation. This is practical common sense that anyone can see and relate to. It is equally understandable then, that when there is a common goal, and yet everyone is competing against each other to attain that goal, the odds of success become much smaller, and greater effort must be expended in competing and utilizing various tactics to reach one's destination - often at the direct expense of the other competitors.

In our story, the common goal of everyone in the building is "Survival". It is in everyone's best interest to reach this goal, and it is understood that there are certain limitations to the structure that the people are currently trapped in which do not allow everyone to immediately reach this goal.

It is clear to everyone that if all of the people unite and move forward together in a cooperative and smooth manner, where everyone comes to an AGREEMENT about the common crisis and take into consideration that they all value their lives equally and that all would like to make it through "Survival", then it is likely that this common agreement will enable all of the people to move quickly and smoothly in an orderly fashion that will not cause conflicts and blockages that slow down the evacuation of the building, and most if not all people will in fact make it through.

Within such an agreement - even if it is not a unanimous decision - so long as the MAJORITY decide and agree that all have a common goal to reach "Survival" and that the most effective and practical means to achieve that goal is through cooperation and unified movement - then even the most stalwart and self-centered persons in the building would eventually be FORCED to either cooperate and in return have the same equal opportunity to reach "Survival", or they can try and get ahead by pushing and shoving and throwing their weight around - and will only be forced back by an overwhelming majority who see this as a clear opposition and danger to what has been decided as being best for everyone.

All things being equal, and all people possessing equal clarity and consideration, they will easily see that agreement and cooperation will be the most effective and practical way to reach "Survival". With effort, patience, and taking the "risk" of trusting in the cooperation of all, the great majority if not all, are certain to reach their goal.

However, there are many factors in the way of people being able to see with this kind of clarity and be able to as a group make this decision and implement it successfully. Because as clear and effective this solution of cooperation is, there is still an alternative - one that if executed properly, removes the fear and danger and nearly guarantees success, but only for a few who act on this quickly.

There is the possibility for an individual to instead decide to do whatever it takes to reach "Survival" - and within this decision the group is not considered. It is assumed that eventually others may decide to disregard the needs of the group as well, and instead seek "Survival" by any means necessary - so those who abide by cooperation and place their trust in collective support will be easily taken advantage of and left behind.

This is the dimension of the "Survivors" - Who disregard and may even take offense to the mutual cooperation of all, seeing that such a process would severely limit the individual's chance for personal survival, and would require that the group take equal responsibility and consideration which is not likely to happen when there are those who will choose self-preservation first. The actions of the "Survivors" disrupt an otherwise orderly and effective group movement, and in doing so undermines the validity of group cooperation, which is further used to justify "why" it is apparently a good idea to focus on self-interest instead of relying on "others".

But WHY and HOW does such an instinct come about? When it was CLEAR that all would be able to reach the common goal of "Survival" when there is full agreement and cooperation, which allows all to reach their destination and be able to live their lives beyond that threshold of "Survival" - with no injury or conflict - with no jealousy or animosity - with no reason for war or violence -how can it be that any OTHER "choice" be seen as valid?

Are the "Survivors" who react with disregard for the wellness of their fellow man to be considered "bad" people, or is there something about their accepted character that indicates something more going on about "human nature" and what we have accepted and allowed to influence our decision making process in a way that causes us to make bad decisions at the most critical times? These are answers the REAL Politician must answer if we are to contend with the various crises humanity faces today in where the stakes are as real as for those in the burning building.

To understand and be able to answer that question we must look at this next dimension - which is the "Survivors" and see how it is that they would reach such a conclusion, we will continue in blog posts to follow where we will look more in depth about how such a decision can be accepted despite seeing what is actually best for everyone. There is already a very big clue as to how this happens , which can be seen if we again imagine that sign above the exit door - the one that reads "Survival" that everyone trapped in the burning building is hoping to reach - picture this sign and for a moment replace that word "Survival" with the "Money".  Ah!, now that is interesting. The situation has shifted a little with this revelation - the factors are a bit different - but the stakes have not changed. Here we begin to see that the common goal to reach "Survival" can also be seen as the common goal to reach "Money", and this will help our understanding the motivation and decision process of the "Survivors" which will be described in detail  in the blog posts to follow.

Continue to the next segment "Surviving Survival"