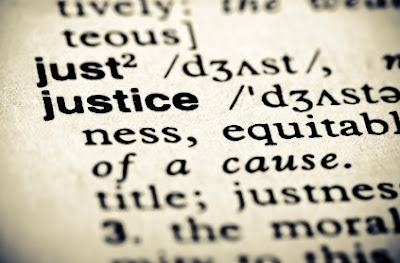 As discussed in the previous blog, we will begin a series here which will be looking at the specificity of political language and will define more clearly what the common arguments and conflicts are in our political system and world system when it comes to ideas which we seem to agree on in principle, but cannot seem to implement.

In this series we will take a look specifically at defining and elaborating on what "social justice" means politically and we will borrow from some of the most influential political philosophers on this subject to see where there are valid points being made that can be applied to our current world, and where there are points that are not applicable and why.

In order for us to properly have a look at this kind of political philosophy and navigate it without ourselves getting lost in the language as we seek to define and specify the actual meaning of terms such as "justice" and "equality" - we have to understand a basic principle, which I will refer to in the blogs to follow.

The first thing to address is the difference between concept and conception.
A concept can be regarded as the "main idea" or "driving principle". A common concept would be the concept of "Freedom". Most people have agreed that "Freedom" is a good thing and should be upheld and aspired to. The problem is not the concept of "Freedom" - but the conceptions of freedom.
With freedom as a concept - everyone has their own idea about what freedom means to them, and what freedom encompasses, and based on those ideas we form conceptions, which would be our idea about how to apply, implement, or express this concept of freedom.

For some, the conception of freedom is that people should not be forced to do things they do not want to do and everyone should be "free" and have the "freedom" to do as they please so long as it does not hurt anyone else. But others can have the conception that "freedom" is about the ability to associate with whomever one chooses and be able to roam the world and not be restricted by boundaries, borders, or laws that would infringe on one's "freedom".

So here we notice the same word - the same concept - but widely different conceptions about what exactly "Freedom" is, how it should be implemented, enforced, or expressed, and various other dimensions which make political decisions and policies having to do with "freedom" mind bogglingly complicated.

The Concept and Conceptions of " Justice"

Having now understood the difference between "concept" and "conception" - we will have a look now at "Justice" within our political and social understanding of it.

Generally, "Justice" is about people getting what is "Just", or "Justified". It is basically about people not being taken advantage of - that the right reparations are made to anybody that has been wronged - that those who violate the social agreements of a society are dealt with properly to ensure no more infringements are made - that there is some kind of agreed upon "system" for things to be in their proper place and for all to get what they are supposed to have, so that society is overall a better place for everybody.

Again, the problems come when we look at the conceptions of "Justice". We see many different conceptions of "Justice" that describe it as being about laws that protect the individual's property, or say that "Justice" is ensuring that everyone is equally considered and that nobody gets an unfair advantage. These are very common conceptions about "Justice" and we see this in our current systems of law and government - but there is clearly an overlap of conflicting ideas when we see "Justice" as being about protecting individual property and individual rights - and "Justice" being about equal consideration of all to ensure that nobody can hold an unequal advantage.

What happens when a group has vastly more resources than others and use those resources for humanitarian projects that help people, but makes it difficult to challenge them in a free market due to their financial power? One can say that they should be protected because they take a risk doing business and they do good things with the money they make, and "Justice" should provide for them.
On the other hand, "Justice" may also dictate that this group has an unfair advantage that ensures they have political and economic power that others do not have and cannot reasonably compete with.

It is for these reasons of conflict and complexity that a CLEAR political language and common agreement of terms and concepts AND conceptions must be developed not only by the political leaders of our world, but by EVERYONE - because everyone IS a political leader by virtue of our participation in this world and by our very presence - because even though we may not actively participate in politics or creating policy or forming political decisions - we are still allowing for politicians and law makers and those in governmental positions to make these kinds of choices IN OUR NAME.

If we truly want "Justice" in our world, we must understand what the main arguments about "Justice" are and where there are disagreements in the conceptions of "Justice" - and as REAL Politicians we must be able to see what points are valid in terms of creating a world system that is best for all, and what is the best possible conception of "Justice" that we can all agree upon, and through this common agreement be able to fully implement/enforce/express in our world.

We MUST realize that as long as we ourselves remain confused and unclear about our own conceptions of "Justice" and do not have an equal, clear, and agreed upon definition of what "Justice" means -  then how can we expect for politicians and leaders in our world to create policies and make decisions about how "Justice" should function, and how would we be able to hold them accountable for something we cannot clearly define or even agree upon?

In this series we will begin looking at the most common and influential conceptions of "Justice" and see the various arguments and conflicts that arise - and from there look at how we can resolve those conflicts and come to an equal understanding of "Justice" that can be applied.

In the next post I will be discussing various conceptions of "Justice" and will be drawing from some of the most influential arguments from political philosophers who have contributed to this subject - those unfamiliar with political philosophy will be in for an academic treat provided as a public service to the future REAL Politicians of our world.

For those already having an understanding of the ideas of John Rawles, Alexis de Tocqueville, and Friedrich von Hayek - let us put the various and opposing theories of "Justice" to the test and see what happens we we bring in the dimension of REAL Political awareness and responsibility.

Stay tuned - and for those who haven't already, do check out the research now under way at http://equalmoney.org as well as the Journey to Life project now being undertaken by people around the world who are ready to change for REAL.
Posted by Unknown at 1:53 AM